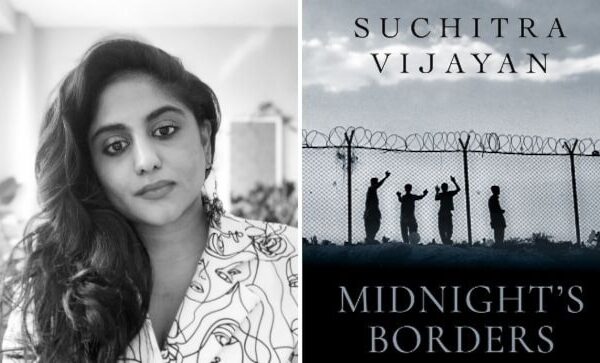 The first true people’s history of modern India, told through a seven-year, 9,000-mile journey along its many contested borders

Sharing borders with six countries and spanning a geography that extends from Pakistan to Myanmar, India is the world’s largest democracy and second most populous country. It is also the site of the world’s biggest crisis of statelessness, as it strips citizenship from hundreds of thousands of its people–especially those living in disputed border regions.

In this stunning work of narrative reportage–featuring over 40 original photographs–we hear from those whose stories are never told: from children playing a cricket match in no-man’s-land, to an elderly man living in complete darkness after sealing off his home from the floodlit border; from a woman who fought to keep a military bunker off of her land, to those living abroad who can no longer find their family history in India.

With profound empathy and a novelistic eye for detail, Vijayan brings us face to face with the brutal legacy of colonialism, state violence, and government corruption. The result is a gripping, urgent dispatch from a modern India in crisis, and the full and vivid portrait of the country we’ve long been missing.

Suchitra Vijayan was born and raised in Madras, India. Her work has appeared in The Washington Post, GQ, The Boston Review, The Nation, The Hindu, and Foreign Policy.

A Barrister by training, she previously worked for the United Nations war crimes tribunals in Yugoslavia and Rwanda before co-founding the Resettlement Legal Aid Project in Cairo, which gives legal aid to Iraqi refugees.

She is an award-winning photographer, the founder and executive director of the Polis Project, a hybrid research and journalism organization. She lives in New York.