Rajagopal's birthday and a note from Ivan Nutbrown

Welcome to the thirteenth issue of Voice of Ekta, a newsletter where we update you on the important news and events at Ekta Parishad India, along with giving you an insight into how we work and what we’ve planned for the near future.

Read on to see notes to Rajaji from Jill Carr-Harris, Julius Reubke, Maggie and Küde and Ivan Nutbrown.

A man on mission to bring justice and peace to deprived communities: Editorial by Ramesh Sharma 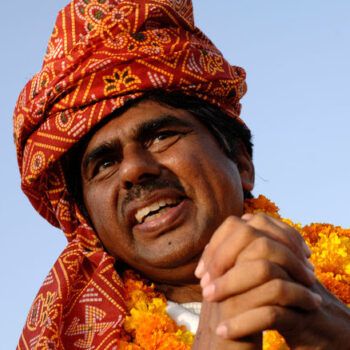 Imagine a leader with a great vision, an activist with a deep devotion to a cause, a friend with deep respect and love, or a teacher full of empathy and knowledge – Rajagopal Ji, fondly known as Raja Ji, is all these things and more.

Raja Ji left his home and family in search of a bigger one at just 18 years of age. He travelled from Kerala to Sewagram and then to Chambal valley, a journey that transformed him. He then began transforming others, mobilising them to work for a larger cause, for the poor and deprived communities.

He trained thousands of grassroots leaders and helped them understand the true meaning of Gandhi’s talisman. He started walking with a handful of friends, and it turned into a caravan of thousands ready to speak up and act for justice. The padayatra began on 10th December 1999 from an unknown Ekta Soipura village in Chambal valley and transformed the life mission of several people.

In the history of social movements, Ekta Parishad has always been known as an organisation created from the ground up in unknown villages and has today become a global organisation with friends across countries and continents.

Thank you, Raja Ji, for your inspirational and charismatic leadership and for giving us all a meaningful life mission.

Short Write Up for Rajaji’s 75th Birthday and Five Decades of his Worklife: Jill Carr-Harris

It was May 1993 when A. Kumarji (a Gandhian leader) asked me to come to meet Rajagopalji at Gandhi Peace Foundation (GPF) for lunch. The idea was to gain Rajaji’s support for some of the South-South Solidarity exchange programs that we were running at the time between Nepal, Bangladesh, and Vietnam and to have Gandhian development methods highlighted within these exposure visits.

During the lunch in the GPF canteen, Rajagopal mentioned that I should make a trip to Katni and Tilda to see the work of Ekta Parishad, which I did with Kumarji later that year. I had the chance to meet the senior leaders, Nath, Gautum, Pushpa, Anita Pawar, Mishraji, Kanta and others.

What I did not realize during the lunch or on the subsequent trip was that these meetings would shape my life forever and become my first steps in a long journey of nonviolent social movement building over the next 30 years with Rajaji and the Ekta Parishad family. 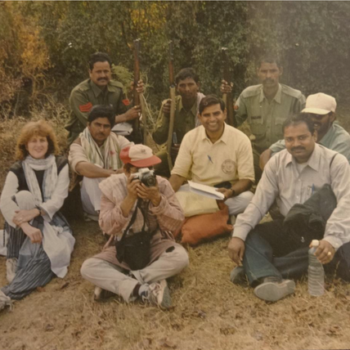 A second short vignette that I wanted to recall in commemorating Rajagopal’s 75th birthday and five decades of his work was when I joined him in his 1999-2000 cross-Madhya Pradesh yatra in Sheopur Kala and Shivpuri (Chambal) for a weeklong trek. (At the time, I was working in Bangladesh on an international development project and came to meet him on the yatra during the holidays.) The trekkers had just celebrated New Year’s Day with Ramesh Shikawar and other former Dacoits (which is seen in the photo attached).

I distinctly recall the pain of dozens of Sahariyas who had been displaced from their homes in the name of preserving Kanha national park. We slept the night in their thatched houses. The next day the padyatrees raised objection with the district officials, and in the days following the six-month yatra in 2002, some land was distributed to these Sahariya families.

These small successes experienced with the Sahariyas during this yatra, continued to be the shiny pearls in the necklace of a people’s history that was woven by Rajagopal and Ekta Parishad over many decades. This story, like so many others, continues to inspire and uplift young people. It would be a fitting tribute on Rajagopal’s celebration day, for many more youths to take up the work of marginalized communities in the pursuit of peace and justice in society.

The challenging mission of applied nonviolence in Chambal valley had been successful, and the dacoits put down their weapons. Fifty years ago, Rajagopal faced a new and very different challenge, his first travel to Europe. While building up the Ekta Parishad network in India and working for BAM, Rajagopal travelled all over the world. Around the turn of the new century, I heard about this famous apostle of nonviolence, thinking he was just another kind of Indian Guruinvading Europe. Everybody seemed to know, most to admire him. 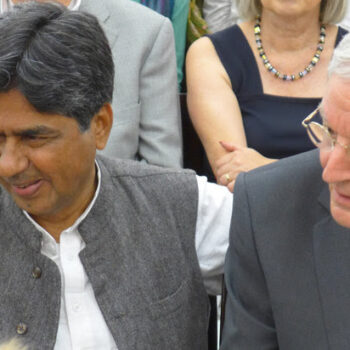 Introduced to the acknowledged Gandhian without quirkiness, I was fascinated by his nonviolence in personal relations. He suggested I should join the upcoming Ekta Europe group. As an old scientist, I was of no use in this circle, but he confirmed I should give it a try. In this group, we all had to learn not to be or become professionals but to act out what needed to be done as best we could. Rajaji, always honest and outspoken, avoided to hurt, even pointing to weak points in your personality or behaviour. The Ekta Europe group formed, worked together and grew. Without Rajaji’s permanent inspiration, it became more difficult, but we realised this initiative of nonviolent activism was exactly what he wanted us to learn.

It took more than 20 years to write “Struggles for Peace and justice” about this great man and the innovative movement he initiated. He is like the Pope, a servant of all humanity, not on top of an organisation but empowering all of us at the bottom to live with Gandhi’s talisman. Like the 15th-century saint Kabir, he is a hard-working man at the bottom of society outside all religious or caste systems, singing, never at rest, creating activity, pushing, moving, and enticing all into nonviolent action for a better world. Thank you, dear Rajaji!

It is a privilege to have met you in conjunction with the creation of the CESCI Centre more than 25 years ago. Of the many things that stand out as unique about you are your energy, charisma, mobilizing skills and your capacity and willingness to listen to other activists struggling with you in our common cause for human rights and dignity – but also to listen with great empathy to the most needy and suffering. 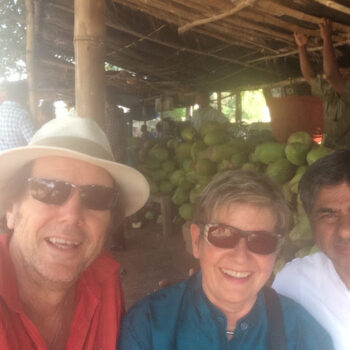 It is these special qualities of you as a leader and human being that made your efforts to carry your Gandhian commitment of nonviolent change and mobilisation to many European countries. You have created here a network of committed small organisations and individuals who have joined in their own context and capacities the struggle of Ekta Parishad for a better, more peaceful world. We know of no other social movement from the South that has been successful in «infecting» so many persons and organisations in the North with its special message and enthusiasm for positive social change.

We remember very well that hot sunny afternoon on July 7 – almost 20 years ago – when we sat in a circle in the front yard of Bryan Osbon’s farm in La Baillarde, drafting the charter of Europe! We were a small group of 16. There are many charters written … and all too often, they remain «paper tigers». From this charter, however, Ekta Europe emerged as a longstanding network with ever new partners, but also a hardcore… which later was transformed to Jai Jagat Europe.

This is a unique achievement which you should be proud of and we – on our part – are very happy about. Our connections and friendship will continue. For this, we thank you once again and wish you continued enthusiasm, energy, undying humour and – most important – good health. One hope, however, we had to give up: That you might one day behave a bit more like a «pensioner» taking it a bit easier… But then again, THAT IS YOU ! whom we admire and love.

With our very warmest and best wishes for your many years to come!

My first meeting with Rajaji was in Delhi some 25 years ago. I had spent a few days in Patna with friends at Prayas and meeting some of the communities they worked with.

When the time came to leave for Delhi, I misread the time of my train. Kapileswar and the team found me a berth on a later, much slower train which was due to reach Delhi the next evening. They told me to go to the Gandhi Peace Foundation and ask for Rajagopal, the secretary, who would look after me. 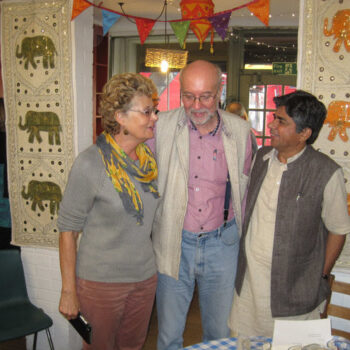 nevitably my train was late, and when I reached GPF the security guard would not let me in and told me to go to a hotel in Paharganj. As it was now very late, I was eventually allowed to meet Rajaji. After briefly explaining who I was and what I had been doing in Bihar, Rajagopal told me that all the rooms were full, but I could sleep on the library floor. Which I did for 2 or 3 nights until I was able to meet Rajaji again and talk in more depth. He was mortified that I had been sleeping on the library floor and immediately arranged for an upgrade to a room!

After that, for some years, I always stayed at GPF and Rajaji, and I developed a friendship which has led to my life-long interest in and support for Ekta Parishad and its campaigns. One particular meeting has stuck with me. 2 October 2000 in Gwalior after the Madhya Pradesh padayatra when I could see the faith that people had in Rajaji and his ability to understand and resolve their problems. After that, from Bihar 2001 onwards, I have joined the actions whenever I could. Thanks, Raja Ji and Ekta Parishad, for this friendship.