Exhibition: Food for Peace and Justice

Gandhi’s fasts, the cultural context of fasting, and in particular for nonviolent change

“If physical fasting is not accompanied by mental fasting it is bound to end in hypocrisy and disaster.”

Gandhi followed the path of non-violence which required not only the lack of use of conventional weapons but to adhere to truth and use of the power of pure love. He believed that the power of Atma (soul) is far better than the power of atom. He chose the truth as a means to achieve political, economic and social independance, and therefore he always informed the people and the respective government officials of his plans of civil disobedient movement and accepted numerous jail sentences by admitted his crime of breaking countless unjust laws. His insistence on following the path of truth meant that he had had to be extremely vigilant about the strict adherence of non-violent actions. Therefore whenever and wherever the rule of non-violence was breached, Gandhi took the responsibility for it and as a penance observed fasts. Gandhi believed that to follow an ethical and moral path was an integral part of every citizen of the world, especially those who recruited themselves as the freedom fighters. Without strong and unblemished character, one cannot fight for ones liberty. His cultural values prompted him use fasts to change the hearts and minds of the people who made mistakes or to assert the righteousness of his principles.

During his long career as a lawyer and a public leader fighting for the rights of Indians living in South Africa and freedom fighter in India Gandhi undertook 17 fasts for various reasons. The total days of his fasts amounts to roughly 135 days. Fasting was a weapon used by Gandhi as part of his philosophy of Ahimsa (non-violence) as well as Satyagraha.

The earliest fasts of seven and fourteen days were observed in Phoenix Ashram-South Africa as a penance for moral laps among some of the inmates of the Ashram in 1913 and in 1925 Gandhi went on fast for the similar reason at Sabarmati Ashram-Ahmedabd.

The first time Gandhi fasted in India in the interest of striking mill workers to protect their rights of fair pay was in Ahmedabad.

Having adopted the policy of non-violence to achieve all big and small cause, Gandhi deplored the use of violent act and immediately condemned those actions by observing fast because he thought it was his responsibility to explain the philosophy of non-violence and civil disobedience to the people of India and show them the way to demand for their rights by peaceful means. So, the news of derailment of a train near the town of Nadiad-Gujarat state prompted first anti violence fasts; followed by fasts observed to oppose the anarchists’ actions against the arrival of the Prince of Wales in 1921.

The most noted fasts marked the atonement of violent reaction at Chauri-Chaura (North Province) where the clash between the demonstrators and police resulted in setting fire to a police station causing deaths of six civilians and 22 policemen during the non-cooperation movement. Gandhi took full responsibility for the violation on non-violent movement and stated that ‘I have made a big mistake – as big as the Himalayas.’ And withdrew the whole campaign of civil disobedience. All the leaders and people who took part in the struggle opposed to Gandhi’s decision to withdraw, but for him, following the non-violent path bore the utmost importance.

By 1924 British India was gripped by Hindu-Muslim disunity and violent attacks from both communities tore apart the fabric of the country. Gandhi decided to go on fast for 21 days hoping to galvanise two communities. He broke the fasts while the Quran and Gita was being read to him.

India was not only divided on the basis of religion. She suffered internal division of caste system for centuries. So called untouchables and lower caste people were segregated and were the victims of inequality which Gandhi wanted it removed. British government was prepared to grant separate electoral rights and reserved seats in assemblies for depressed classes. Gandhi envisaged how it can break the whole Hindu society into thousands of  pieces. To stop this divisive right being awarded Gandhi went on fast in 1932. May and August of 1933 saw Gandhi’s 21 and 7 days fasts in favour of the conditions of untouchables and against untouchables trying to obtain privileges awarded by the British government.

In 1942 the National Congress launched the last attack on the British rule; ‘Quit India’. In 1943 Gandhi was arrested. He admitted the Viceroy’s claim that the Indian National Congress was responsible for the unrest of 1942, but he protested against his detention without charges and undertook a 21-day fast.

One of the most important fasts Gandhi observed were in 1947 at Noakhali in order to stop the communal riots fuelled by the partition. The out going and newly appointed government was unable to extinguish the flame of hatred and violence in which hundreds lost their lives from both Hindu and Muslim communities. What the army of thousands of soldiers could not achieve in Punjab, Gandhi’s fasts could achieve in Bengal.

13 January 1948 Gandhi declared fast unto death as a penance for the communal riots and as a means to restore lasting peace in the hearts fo Hindus and Muslims.

Following image is of Gandhi’s last fast in the city of dead.

Gandhi stepped into public life while he was in South Africa. We can notice that he fasted for different causes: as a penance for moral laps of the people under his care, violent actions of radical factions of independent movement, in support of removal of untouchability, in opposition of British acts, for Hindu-Muslim unity and against communal violence.

Because Gandhi only preached what he practiced, he had a moral authority to change minds and hearts of millions of people. He said, “If physical fasting is not accompanied by mental fasting it is bound to end in hypocrisy and disaster.” Gandhi 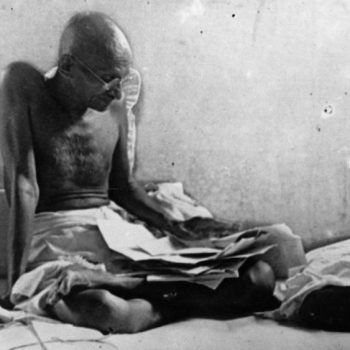 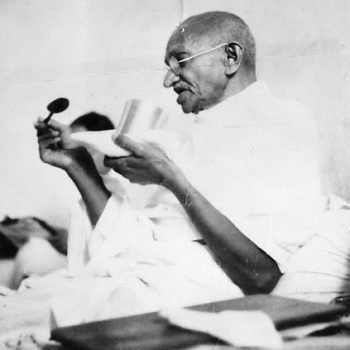 Back to Exhibition: Food for Peace and Justice