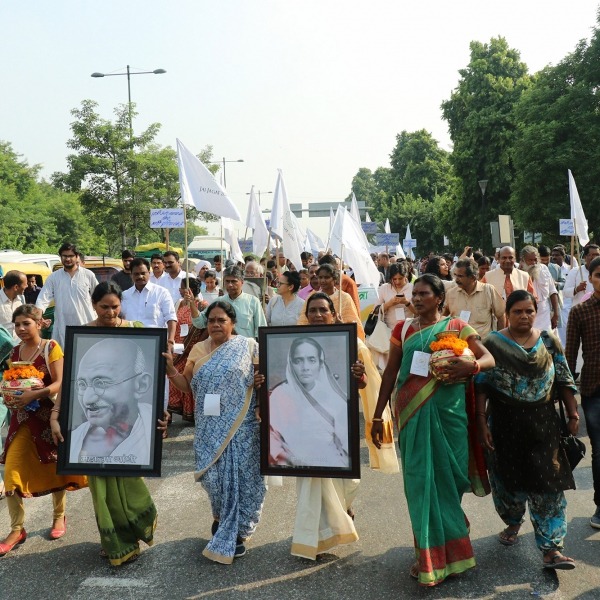 Jai Jagat 2020 – On the Move for Peace and Justice

Jai Jagat 2020 – On the Move for Peace and Justice

On 2nd October 2019, Gandhi’s 150th Birth Anniversary, Ekta Parishad began a yearlong Global Peace March from Delhi to Geneva with 50 walkers, Indian and International. Their mission was to hold the UN to account to take forward its Sustainable Development Goals, especially the eradication of poverty, reduction of discrimination, fight against climate change, and nonviolent conflict resolution.

The core vision of Jai Jagat is to create a space where groups and movements can come together to enact change non-violently and address issues related to justice and peace. Such a convergence is vital to change public opinion in favour of an alternative development process that is pro-people, pro-poor and pro-nature.

The Jai Jagat draws from Mahatma Gandhi’s principle of sarvodya (social inclusion); it was formulated by Gandhi’s associate, Vinoba Bhave to mean planetary unity. In modern parlance it may be said to mean: “All for the planet and the planet for All (Everyone)”.  Some people translate it as “victory for all” so no one is a loser but we are all winners.

The Jai Jagat campaign works from the local level upwards, which is central to the Jai Jagat vision. At the local level people have the potential to self-govern and become self-sufficient communities. This can be in rural or urban areas. It works towards a more sustainable relationship with nature and our larger ecosystem and enables diverse development practices that draw from individual and group actions.

Strengthening many local communities with bottom-up decision-making and inclusive development that is linked to changing global institutions like the WTO, IMF and World Bank; as well as global policies like the SDGs, Jai Jagat assists  people to have more autonomy and less dependence on the State.

In contrast to other such forums, the Jai Jagat is also an organization that draws inspiration from Mahatma Gandhi’s legacy. Marches are an important element of action as they require people to suffer for their convictions and this attracts respect and solidarity. Out of these actions people begin to transform in various ways such as to practise non-violence in their life and in their communities.